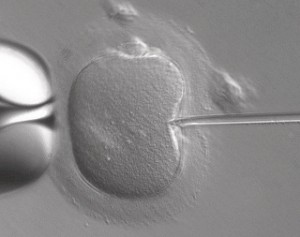 On April 10, 2014 the Ontario government announced plans to expand its funding for infertility services and contribute to one cycle of IVF per patient for all forms of infertility. The funding expansion is reported to begin in 2015. This blog post provides an overview of why the announcement was so warmly welcomed by the entire fertility community.

In-vitro fertilization (“IVF”) is a medical procedure whereby eggs are retrieved from a woman and fertilized by sperm outside her body. The resulting embryo(s) are transferred into her uterus to achieve a pregnancy.

IVF is an effective solution for couples experiencing infertility and for same-sex couples who wish to conceive a child through assisted reproductive technologies. However, it is not very affordable for most Ontarians. Though prices vary by clinic and the circumstances of the patient, IVF typically costs upwards of ten thousand dollars (particularly if multiple cycles are required).

Why is IVF funding so important?

To many people’s surprise, the Ontario government does not fund the majority of IVF procedures. Under the Health Insurance Act regulations, OHIP coverage for IVF is limited only to patients whose infertility is due to complete bilateral anatomical fallopian tube blockage that has not resulted from sterilization. In such cases OHIP will pay for the first three treatment cycles.

This law has been incredibly frustrating and challenging for people who cannot conceive or carry a child for a host of other medical reasons, such as people who are born without a uterus, or rendered infertile because of cancer treatments. Contrary to popular belief, most people experiencing infertility are not struggling because they waited too long to have children; rather, they have legitimate medical issues that make starting a family without IVF impossible.

There have been significant individual and systemic advocacy efforts to encourage the government to expand funding for IVF.  As discussed in our blog, Who Receives OHIP Funding for IVF?, there have been numerous legal challenges to the existing law but the clear and narrow wording of the law has been consistently upheld.

One of the most persuasive arguments to convince the government to fund IVF has been the cost-savings argument.

Because IVF is so expensive, many patients will opt to transfer two or three embryos at one time. This increases the chance of achieving a pregnancy and may result in more than one child, allowing families to have multiple children for the price of one. However, multiple pregnancies enhance the risk to the pregnant woman and the children. There is a greater risk of complication during pregnancy and delivery, and babies are more likely to be born prematurely and have low-birth weights. It has been argued that it would be more cost-effective to pay for IVF and require single embryo transfers than to pay the hospital and other health care costs that arise from multiple births. Several years ago a panel created by the Ontario government researched this issue and concluded that “Ontario cannot afford to NOT fund assisted reproduction services.”

For members of the fertility community –  health professionals, lawyers, surrogacy agencies and advocates for government funding – this news is warmly welcomed not merely because of the cost savings but because of the emotional and financial struggle that people with infertility experience to start a family. Infertility is a heartbreaking and expensive medical condition and this funding represents the possibility of reducing some of that suffering.

What about people who require IVF for non-medical reasons?

While the funding announcement is welcome news, there are further discussions to be had with respect to eligibility.

One concern that was raised immediately following the announcement is whether members of the LGBTQ community will also be eligible for funding. The announcement states that the proposed funding is to help people with “all forms of infertility” who cannot conceive children.

Many people who do not have fertility issues must still pay for IVF in order to conceive a child. For example:

Where surrogates and egg donors are used, it is possible that IVF could be avoided if one woman were used as both the surrogate and egg donor; however, there are significant legal risks with this approach for the surrogate and the intended parent(s). As well, in some contexts, this would be in contravention of the couple’s desire to have both partners contribute in a physical aspect to the pregnancy.

Some people have suggested that excluding people in the LGBTQ community is discriminatory. Others see a clear distinction between funding IVF for people for whom infertility is a medical issue versus those for whom it is not a medical issue.

If the rationale for funding is in fact to save health care dollars then the government should include all persons pursuing IVF to start a family. This is because the costs of IVF are no less prohibitive regardless of whether a person or couple is pursuing IVF due to infertility, sexual orientation or by virtue of being a single parent, and therefore multiple births will continue to be prevalent among people who require IVF for non-medical reasons.

Note: If you are planning to pursue IVF with a partner, you may wish to consider entering into an Embryo Disposition Agreement with your partner.